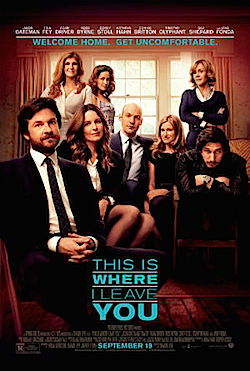 When I saw the movie poster for This is Where I Leave You (2014), I thought it might be a comedy.  The actors all looked like they were mugging a bit, and it showed Tina Fey as a member of the cast.   While I can confirm this movie had some funny moments, it definitely wasn’t a comedy.

It some ways, it took a fairly long time for this film to grow on me.  At first, I found myself feeling indifferent to most of the characters and their situations.  (This family is not immediately likable.)

Yet over time, I found myself slowly coming into this family’s world and getting to know them – warts and all – and through that metamorphosis I began to get pulled into this film.

Like the character Judd’s life, this film is complicated.  It didn’t hit me over the head and say, “Like me!”.  Rather, it let its story unfold at its own pace, opening the door for me but never insisting that I come on board.  That was left to me.

And I’ve very glad I decided to go along for the ride!

3 thoughts on “This is Where I Leave You”