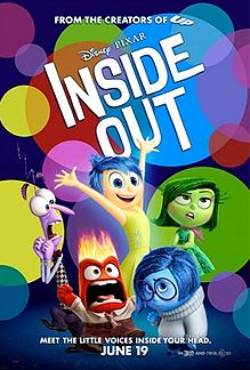 Wow. Let me just state that again for the record.

Based on the coming attractions, I thought I’d be seeing a very funny comedy when I attended this evening’s 3-D screening of Inside Out (2015).

And I did; however, I got so much more…

Not since the utterly amazing film, Up (2009), have I seen such a superbly crafted story.  The characterizations and voices were outstanding and fit the characters perfectly – particularly John Kind (I was trying to place that familiar voice) in an especially poignant portrayal of Bing Bong, an imaginary friend of the main character, Riley.

This is not – I repeat not – a little kid’s movie.  Sure, they’ll love the animation and the fact that much of the film is quite funny.  However, the more subtle (and better) aspects of the film will likely be lost on them.

Without risking spoiling anything for you, I can say that the colorful characters you see in the movie poster are the various emotions of the aforementioned main character, Riley.  Interestingly, I initially felt frustration because I didn’t realize why one of these characters/emotions, Sadness, felt compelled to start touching seemingly everything in sight inside Riley’s control room.  It wasn’t until after the credits ran that understanding came to me, and at that moment I felt compassion.

If that didn’t make any sense to you, I expect you’re not alone.  (It’ll make sense after you’ve seen the film.)

The point is, this film takes on some very big psychological topics by making them digestible via the medium of the cartoon.  And it makes you think – and feel.

Not bad for a cartoooooooooon…

Go see it!  (By the way, the movie was accompanied by the short subject, Lava (2014), which I found utterly charming.)

2 thoughts on “Inside Out”